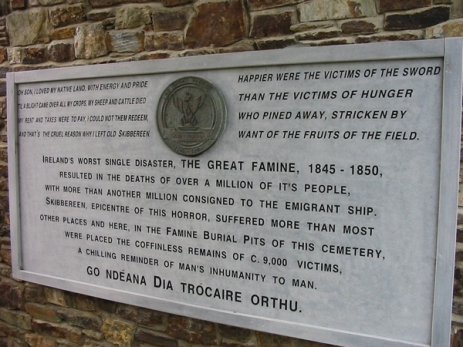 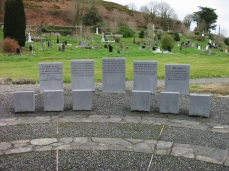 Note:
Several post-1990 memorials and plaques are located on the grounds of Abbeystrowery Cemetery, used as a mass graveyard during the Famine, including high cross monument, grave slab monument, and wall plaques.

Inscriptions
Wall plaque 1:
Oh son, I loved my native land, with energy and pride / Til a blight came over all my crops, my sheep and cattle died / My rent and taxes were to pay, I could not them redeem / And that’s the cruel reason why I left old Skibbereen.

Ireland’s worst single disaster, the Great Famine, 1845-1850, / resulted in the deaths of over a million of it’s people, / with more than another million consigned to the emigrant ship. / Skibbereen, epicentre of this horror, suffered more than most / other places and here, in the Famine Burial Pits of this cemetery, / were placed the coffinless remains of c. 9,000 victims, / a chilling reminder of man’s inhumanity to man.

Donations / for / the upkeep / of the / Famine Plot

(2)
A million a decade! – of human wrecks, / corpses lying in fever sheds – / corpses huddled on foundering decks, / and shroudless dead on their rocky beds; / nerve and muscle, and heart and brain. / Lost to Ireland – Lost in vain.

(3)
Pause – and you can almost hear / the sounds echo down the ages; / the creak of the burial cart, / the rattle of the hinged-coffin door, / the sigh of spade on earth, / now and again, all day long.

(4)
Here in humiliation and sorrow, / not unmixed with indignation, / one is driven to exclaim: / O God! That bread should be so dear / and human flesh so cheap.

Cross inscription:
Erected to / the memory of / all those who are buried / in this / ancient cemetery / Please pray / for the families whose names / are recorded in this / commemoration plot [various names engraved on paving]