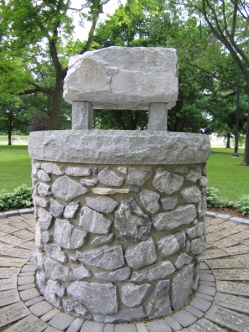 Inscriptions
[top of base]
This Irish Famine Memorial honors the memory of the more than one million Irish who suffered and died during the Great Famine of 1845-1850 and the millions more who were forced to emigrate during the Famine and in the Irish Diaspora that followed, and all the victims of famine, oppression and genocide everywhere.

This raised stone formed part of the Penrose Quay in Cobh Harbor, Cork, Ireland, where thousands of Irish took their last steps in their homeland as they fled the famine to America and other countries, some to the Southern Tier and Northwest, PA, where they are remembered in 2000 with these memorial stones.

[Back of stone]
This stone quarried in Ireland in the 1800s.

[Beneath stone]
Ma thochidiud so, go neighfidh na clocha fein. Luke 19:40
If these were to be silent, the very stones would cry out. Luke 19:40.
[verse taken from the Buffalo monument as translated by Laurence Shine]